Back in 1992, I was pleased to be invited by Geoff Sadler to contribute a couple of entries to the encyclopaedia of Twentieth-Century Western Writers he was compiling and editing for  St. James Press. One of these was Thomas McGuane, the other, his friend Jim Harrison.

Here are the first five paragraphs of my piece, along with the last (the middle section mostly deals with another of Harrison’s fine novels, Dalva). 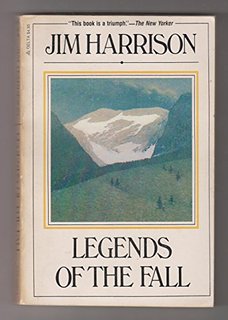 I first became aware of Jim Harrison’s writing during a visit to California in 1981. A friend, thinking, no doubt, that my own efforts would benefit from some stiffening of style and elevation of purpose, presented me with the Delta paperback edition of Harrison’s Legends of the Fall and having, as it were, lit the touch paper, tactfully withdrew. I read the three novellas in the books with greed and widening amazement, part on a Greyhound bound from Sacramento to San Francisco, more in a cabin in PointLobos, within earshot of Big Sur. When I’d finished them through once and my companion had done the same, I read them again. When the British hardcover edition was, sadly, remaindered in conscpicuous quantities, I bought enough to give to most of my friends and not a few of my enemies.

Rereading Legends of the Fall before writing this piece, my reactions to the first story, “Revenge”, and the last, the title story, were scarcely less effusive. What is audacious is Harrison’s ambition – there is no getting around either the narrative scope here, nor its extreme seriousness and emotional intensity – and the control of material and style, which never seems to desert him. Apparently, Harrison was told by a regretful publisher that if only he’d written Legends of the Fall to around 600 pages instead of a mere 80, the New York Times Best Sellers List would have been theirs for the taking. He was right, of course – it’s all there: generation, war, unforgetting love and unforgiveable lust, insanity, individuality, honour and betrayal. But at that length it would have been another fat epic, better than most. As it stands it’s as close to perfect as you can get without falling off the edge.

This is how it begins:

Late in October in 1914 three brothers rode from Choteau, Montana, to Calgary in Alberta to enlist in the Great War (the U.S. did not enter until 1917). An old Cheyenne named One Stab rode with them to return with the horses in tow because the horses were blooded and their father did not think it fitting for his sons to ride off to war on nags. One Stab knew all the shortcuts in the northern Rockies so their ride traversed wild country, much of it far from roads and settlements. They left before dawn with their father holding an oil lamp in the stable dressed in his buffalo robe, all of them silent, and the farewell breath he embraced them with rose in a small white cloud to the rafters.

Much of the style and substance of Harrison’s writing is contained in that opening paragraph. The language is direct, the world is primarily a masculine one with its own rituals and codes, and that ritual quality is achieved through the language and structure. The influence, I would guess, is Hemingway, but there’s a weightier, almost a biblical cadence here that is Harrison’s own. The land – specifically the land of the mid- and north-west – and the journeys from that land to take part in foreign wars, are integral to much of his work, as is the relationship between the descendants of white European settlers and the surviving Native Americans. The graceful muscularity of the prose and the normally unsentimental presentations of the natural world enable Harrison (in my contention) to get away with the final description of the father’s farewell breath here, allowing it to take on a metaphoric, almost mythic quality, rather than subsiding towards bathos and sentimentality.

There are links between Harrison and an informal Montana-Key West group that includes fellow-writer Thomas McGuane, the painter Russell Chatham, singer Jimmy Buffet and actors such as Peter Fonda and Harry Dean Stanton. All of the U.S. editions of his books have reproductions on their jackets of Chatham’s work – two of them with the permission of their current owner, Stanton. It was McGuane who gave Harrison an important, early push and the two have collaborated together on at least one original screenplay, Cold Feet. Harrison, it seems, writes screenplays to keep his head above financial water while concentrating most of his creative energies on poetry and fiction …

… Harrison’s work is a world away from the self-regarding ironists so fashionable in New York literary circles. In that sense, he is a regional, a Western writer. As he said in an interview in Publishers Weekly: “I like grit, I like love and death, I’m tired of irony … I would rather give full vent to all human loves and disappointments, and take a chance on being corny, than die a smarts.”

He certainly avoided that.

You might also want to take a look at Michael Carlson’s Irresistible Targets blog , where he writes about Jim Harrison and gives a link to the Harrison obituary he wrote for the Guardian. http://irresistibletargets.blogspot.co.uk/2016/03/jim-harrison-guardian-obituary.html