There I was in Stevenage this Saturday just past, walking up Monkswood Way towards the Lamex Stadium, home of Stevenage Football Club  – hosts that afternoon to Notts County – when I noticed both sides of the busy road were bordered by woodland. Thinnish, it’s true, but woodland nonetheless: on the near side shielding the bizarrely named Roaring Meg Retail and Leisure Park; on the other, the edges of the Monkswood Estate and the fringes of Fairlands Valley Park, through which, in the early 70s, I would walk most mornings to the secondary school where I was teaching.

But then, instead of thinking about how Notts were going to fare that afternoon [They won 3-0, extraordinary!] I found myself thinking instead of the woods in the paintings of George Shaw, whose exhibition, A Corner of a Foreign Field, I’d visited at Bath’s Holbourne Museum the day before. Shaw’s paintings, executed in the Humbrol enamel paint beloved of boys who spent hours making Airfix models in their rooms [back in the days when boys used to make Airfix models in their rooms] take as their subject the Tile Hill area of Coventry, where he was born and brought up. An area of new housing built on the edge of the city, on the edge of woodland. A bit like Stevenage, really; Stevenage New Town. Brave New World.

Some people stay; some move on. Part of Shaw has stayed where he lived out his childhood and adolescence. So he goes back, makes drawings, takes photographs. Paints the rows of similar houses, tatty now; the abandoned garages and sheds; those woods …

When I was not yet grown up the woods at the back of our house was that other world It was a world of our own making outside the usual time and the usual cartography and far from the governance of mums and dads and nosy neighbours and teachers. You never saw a copper in the woods. When the time would come no one would save you. 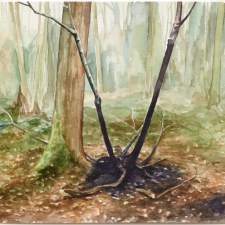 These paintings are haunted by absence. Memory. Doors which are never opened; paths along which no one walks; bus shelters; shops permanently closed. Borders, fences, gates, railings. Signs of a life that has been lived and is being steadily left behind, with Shaw chronicling its demise. 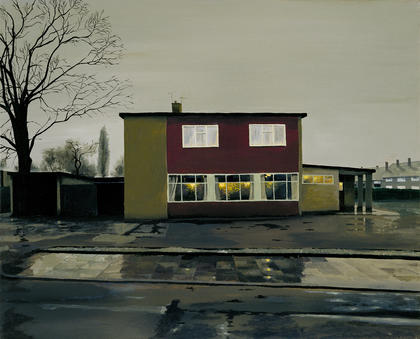