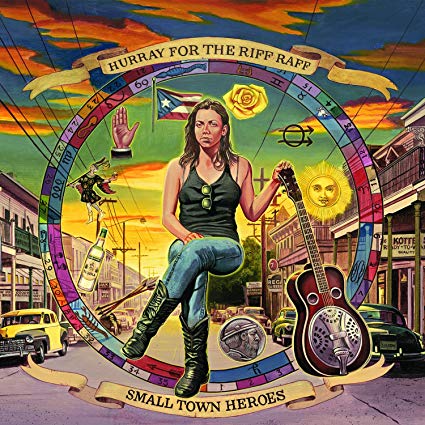 3. Beyond the Horizon : Bob Dylan, from Modern Times

4. Four or Five Times : Jimmie Noone, from Clarinet Frequency

7. In a Sentimental Mood : Robert Wyatt, from For the Ghosts Within

8. What Can I Say? : Boz Scaggs, from Silk Degrees

* The lead singer and leading light in Hurrah for the Riff Raff, is Alynda Segarra, who was born in the Bronx of Puerto Rican heritage and whose mother, Ninfa Segarra, is a former Deputy Mayor of New York City. The band’s most recent album, The Navigator, was released in 2017 and there is a quite superb video, directed by Kristian Mercado Figueroa and photographed by Rudolph Costin, featuring one of the tracks, Pa’lante.

**This was recorded in December, 1958, along with The Bear Steps Out, only the second session by the version of the Lyttelton Band that regularly featured three saxophones in the line up for the first time – Tony Coe on alto, Jimmy Skidmore on tenor and Joe Temperley on bartitone – giving the ensemble a little-big-band sound that confirmed, for good, its move from traditional to mainstream jazz and the style of such as Duke Ellington, Count Basie and Buck Clayton. As such, I saw and heard them at the 100 Club in Oxford Street many times.

***By 1966 Georgie Fame had enough clout, I guess, to talk the powers-that-be at EMI into letting him live out one of his fantasies and make an album with a big band, a band that would sound as close to that of Count Basie as possible. [And he did get to sing with the actual Basie band just a year later. Lil’ Darlin’, which Georgie knew from the Lambert, Hendricks & Ross album, Sing a Song of Basie, was first up at the first session and as he said, “I was terrified because it was such a challenge. I had to produce these long, clear, straight notes … It was the first track we did, so I do sound very nervous. It’s a hard song to sing if you’re not confident. I get a bit embarrassed when I listen to it now, but I was trying.” Sounds pretty good to me.

****Written by Rob McMinn, who also plays guitar on the track, plus everything else that’s going, this is another of Rob’s hypnotic songs of barely requited love.

The first time I laid eyes on Georgie Fame would have been at an all-nighter at the Flamingo, somewhere around 1962 or 63. Georgie, already renamed by agent Larry Parnes and no longer Clive Powell, leading a band called the Blue Flames, the nucleus of which had been Billy Fury’s backing band, and was now playing a potent blend of blues and jazz with ska overtones, the overall sound, with Georgie on Hammond organ, owing a lot to Jimmy Smith and Booker T and the M.G.s, his vocals suggested he’d been listening to not a little Mose Allison.

They were great evenings, great nights, dancing up a sweat or just standing around on the side lines, trying to look cool – or, as we used to call it, hip. And there was always the frisson stemming from the rumour  that the place was frequented by gangsters and other dangerous types from the Soho demi-monde – a rumour substantiated when Johnny Edgecombe and Aloysius Gordon fought there over the affections of Christine Keeler and gave traction to what became known as the Profumo Affair.

Now the BBC [God bless them and the licence] have revisited the first Georgie Fame and The Blue Flames album, Rhythm and Blues At The Flamingo, recorded in September 1963, for its Mastertape series, resulting in two hours of material, music and memory, which will be broadcast in December.

For more details of this, take a look at this post on Richard Williams excellent music blog, The Blue Moment, here …