Born into a Palestinian family in Beirut and living in London and Berlin, Mona Hatoum makes work – installations, sculpture – that confronts the world. Directly; indirectly. Sometimes more so, sometimes less.

Remains to be Seen, The first piece in her current show at the White Cube in Bermondsey,  takes up most of the space in which it is displayed. Pieces of concrete attached to steel hawsers: the skeleton of a building. The kind we are used to seeing on news reports from Syria and the Middle East, except that those buildings have been so torn and twisted, damaged to the point where it becomes difficult to imagine them as they once were. Here everything is arranged in perfect formation, so that we are asked to see both the original and the aftermath simultaneously. As Hatoum has said of her work, it is about conflict and contradiction, both evident within the object itself.

I want the work in the first instance to have a strong formal presence and through the physical experience to activate a psychological and emotional response.

The other installation which struck me most forcefully was Remains of the Day, which was originally created for the 10th Hiroshima Art Prize exhibition. Less room for ambivalence here. Charred remnants of a home are arranged around the sides of a room: chairs on which people have sat down to dinner; a child’s cot; a toy truck; a life burned to cinders and ash.

A daft title to this piece, when exhibitions like the retrospective of Saul Leiter’s work at The Photographers’ Gallery early in the year make all too clear the extent to which photography – some photography – successfully aspires to the qualities and conditions of visual art, of painting, thus making the distinction unnecessary. Leiter, of course, became a photographer almost by default as his family disapproved of his initial ambition to be a painter. Also excellent were Alec Soth’s photographs under the title Gathered Leaves at the Science Museum’s Media Space, Paul Strand’s photographs and films at the V&A, and, perhaps best of all, William Eggleston’s Portraits at, not surprisingly, the National Portrait Gallery.

The two most compelling – and rewarding – art exhibitions for me were Mona Hatoum at Tate Modern (conceptual art to admire the look and construction of as well as to think about) and the Frank Auerbach retrospective, continuing from the previous year, at Tate Britain. The Georg Baselitz show, We’re Off, at the White Cube, Bermondsey was quite powerful and  Georgia O’Keefe at Tate Modern was well-curated and therefore interesting, though I found it hard to warm to much of the actual work. The survey of Abstract Expressionism at the Royal Academy gave over its central rooms to some magnificent pieces by Jackson Pollock – quite staggering in their rhythm, their use of colour, their complexity and their unity – as well as lovely, compelling work by Joan Mitchell, Sam Francis and Phillip Guston – and they’re just my personal favourites. But why only one work by Helen Frankenthaler and that far from her best?

The last show I got to see before the year’s end was the excellent Rauschenberg retrospective at Tate Modern. It was seeing the exhibition of Rauschenberg’s work at the Whitechapel Gallery in 1964 that first got me interested in post-war American art – in twentieth century art at all, really – an enthusiasm that has only strengthened over the intervening years. What is perhaps most striking – most enjoyable – about the Tate show is the effective way in which is demonstrates Rauschenberg’s range – combines, collages, performance pieces, sculptures, photographs, drawings, paintings, collaborations with Merce Cunningham, with John Cage and Jasper Johns – the variety and exuberance of his work, almost right to the end of his life, is astounding.

The first time I knowingly came across the work of the artist, Mona Hatoum, was when three of of her pieces were included in Between Cinema and a Hard Place, a group show at Tate Modern in 2000, curated by Frances Morris and including work by, amongst others, Douglas Gordon, Anthony Gormley, Anish Kapoor, Cornelia Parker and Rachel Whiteread. It wasn’t until some years later, 2011, when I was taking a course taught by Dr. Diane Silverthorne, Art & Identity: History, Memory and Post-war Art, as part of the History of Art programme at Birkbeck, University of London, that I encountered her work again, when it was included in the exhibition, Jean Genet Act 1 & Act 2, at Nottingham Contemporary.

The second half of that exhibition, Act 2, was organised around Genet’s support for anti-colonialism, focussing on the Black Panthers in the United States and the freedom fighters of the Palestinian Fedayeen. Born in Beirut to a Palestinian family but living in London, and later, Berlin, it was in this latter context that Hatoum’s work was shown.

There were two of Hatoum’s pieces in the show, Keffiah (1998 – 2000) a traditional Arab scarf , embroidered with female human hair and Still Life (2008-2009) made from glazed ceramics, wood and painted steel.

As I noted at the time, in this latter work there are 42 small ceramic pieces, each individually coloured and approximately the size of a piece of fruit such as an apple you might hold in your hand. Some are round, like baubles, others oval: some are smooth, but the majority are divided on the outer surface into ridged sections similar to the outside of a pineapple. In general, the colours – greens, blues, yellow, orange, red, white and black – are bright, the surfaces highly glazed so as to reflect the light.

The objects are arranged in a seemingly casual way on a wooden table, open to view, open – apparently – to touch. Their very openness is appealing, and, within the setting of the gallery, unusual. Their brightness invites us to come close, walk around the table, examine them as we would pieces of fruit – the title, Still Life – reinforces this notion. And yet we don’t pick them up. In part, due to our awareness of what is appropriate and inappropriate with works of art, but also because our initial reading of the objects has now (surely?) been replaced by another. These attractive, seemingly innocent objects are potentially lethal; they are like hand grenades, small explosive devices, and to touch (like Eve plucking the forbidden apple from the tree) is to court destruction. The title, Still Life, takes on an ironic twist.

And further, “I want the work in the first instance to have a strong formal presence, and through the physical experience to activate a psychological and emotional response.”

The current exhibition at Tate Modern (till August 21st), a retrospective that concentrates on the sculptures and installations Hatoum has been making since the late 1980s, makes clear the extent to which she has achieved those aims. Piece after piece draws you in then sends a jolt to your brain while kicking you in the gut. It’s terrific work, not least because it’s about stuff that matters. 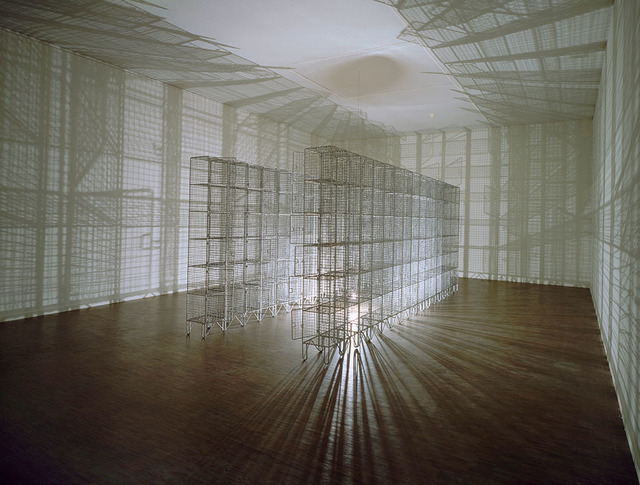 … a three-sided construction made up of wire mesh lockers and illuminated by a single light bulb moving slowly up and down at the centre and casting shadows on the surrounding walls. We think of animal cages, experiments; think of blocks of flats, certain kinds of architecture, human beings crammed together, caged; as we walk around the light throws our shadows, too, onto the walls amongst the grids and squares so that for the time we walk around we have this sense of being trapped there, caged also.

… a video piece in which Arabic writing, representing the letters Hatoum received from her mother while living in London, is veiled across images of her mother in the shower at her home in Beirut, the soundtrack carrying both a conversation between Hatoum and her mother in Arabic and Hatoum’s voice reading a translation of the letters into English. As well as showing the closeness and intensity of their relationship, as Hatoum says, “it also speaks of exile, displacement, disorientation and a tremendous sense of loss as a result of the separation caused by the war.”

One of Hatoum’s earliest works was a performance piece in which she walked through the streets of Brixton in bare feet with Doc Marten boots – footwear favoured by both skinheads and police – attached to her ankles by their laces. On the day of my first visit to the exhibition at Tate Modern, we were followed around by two men in their late 20s, early 30s, both wearing shorts, each man holding a long pair of leather reins – the kind more normally associated with dogs – at the end of which two small children crawled and tottered and cried.  Containment, anyone? Conflict, contradiction? It should have been an art work, but it wasn’t.

This is a wonderful show, genuinely thought-provoking, by a major artist, and for anyone interested in the relationships between contemporary art and life pretty essential. See it if you can.