If one of The Photography Gallery’s ambitions when setting up it’s current pair of shows  (until 14th October, 2018) was to establish the widest possible contrast between two artists’ practice, they could hardly have chosen better than to focus on Tish Murtha [whom I wrote about in my previous blog post] and Alex Prager. Murtha is firmly in the school of documentary realism, black and white, working class, political, small scale in image, universal in reach and meaning. Prager, in contrast, is high colour, glossy, large scale, concerned with politics of gender and deeply indebted to film imagery and technique – not any kind of film, but that exemplified by Hitchcock and Douglas Sirk – technicoloured melodramas that simultaneously present a heightened version of real life at the very same time as they foreground the means they use (colour, lighting, mise-en-scene) to point up its falseness, its fakery. Gendered Hollywood fairy tales. [Like all fairy tales?]

Shots like the one above were made on a sound stage using up to 150 extras.
Images such as the one below, which could almost be a production still from The Birds, make explicit not just Pragers’ obsession with Hitchcock, but her obsession with his obsession – young blonde women under threat, held under the camera’s gaze.

The section in The Photographers’ Gallery regular booklet series, Loose Associations, which deals with Prager’s work, includes extracts from feminist film critic and academic Laura Mulvey’s key 1975 article Visual Pleasure and Narrative Cinema, which dissects the ways in which classic Hollywood film positions women at the ultimately passive receiving end of the all-powerful male gaze. And that’s a three-way: male behind the camera; male within the narrative; male in the audience. Hitchcock – for Prager, whose concerns, one suspects, are similar to Mulvey’s  – is, of course, the perfect subject, the perfect example, perfect for them both, in that he is transparent as to both ends and means. After several viewings, it seems to me, it’s difficult not to see Vertigo, for instance, as an object lesson in just how male dominance of the female in terms of image, action and emotional response can be achieved.

It’s no surprise that Prager moved from photography – the kind of large scale, pre-planned and well-resourced still photography that is well displayed on two floors at TPG – to film itself. Short films with large crews and real stars. For Touch of Evil, commissioned by the New York Times, she managed to nab a host of A-listers including Jessica Chastain, George Clooney, Kirsten Dunst and Rooney Mara. The ‘star’ of Face in the Crowd, one of the films showing at TPG, is Elizabeth Banks, playing an attractive blonde woman (what else) forever, seemingly, trapped behind a wall of glass, while around her – the film is shown on three screens, central, left & right – various crowds are shown on the beach, at a ball game, crowds from which individuals are intermittently seen in close up, expressing their doubts and fears to camera.

Is it possible to look at Prager’s work and see only the surface, enjoy the size, the visceral pleasure, the high-gloss slickness of it, and not be concerned with what rides beneath? That, after all, would be the mainstream Hollywood way. But here we’re not submerged in the dark. We’re in a gallery and this is art. As well as responding on an immediate love, we’re expected to think. And we do.

Circumstances dictate 50/60 minutes of slowly walking back and forth, standing, staring, is about all I can manage right now, which means I’ll be back at The Photographers’ Gallery more than once before it’s recently opened brace of shows closes on October 14th.

On the second floor is a cross-section of the work of Tish Murtha, a too-little-known (until now) and under-represented member of that group of British documentary realist photographers of the 70s & 80s who saw their function as being to show the rancid decay of working class life and community under a Conservative government. Men laid off. Heavy industry in decline. Mass youth unemployment.

Murtha grew up, one of ten children, on a housing estate in the Elswick area of Newcastle, got herself to college, got a camera, got a place on David Hurn’s Documentary Photography course at Newport College of Art in South Wales. Newport – Newcastle : in many ways not so very different. “I want to learn to take photographs of policemen kicking kids,” she allegedly said at her interview.

Looking at the work – kids, mainly kids – youths in unemployed abundance – I was reminded of something I’d quoted in my last piece on this blog about another artist from the north-east, the poet Barry MacSweeney …

Except that, political as it clearly is, and some pictures do depict a moribund sense of despair, there is little or nothing that I would describe as vicious in Murtha’s depictions of the places and people she knew and whose backgrounds she had shared. What I see is understanding, compassion – two-shots showing love, togetherness, fortitude – a young girl, perhaps eight or nine years old, staring back at the camera as if asking what can my life be, can I be like you?

David Hurn suggests an affinity with the work and ambition of the American photographer, Lewis Hine …

Tish Murtha does both.

Tish Murtha: Works 1976-1991 was curated by Val Williams and Gordon MacDonald, with Karen McQuaid, and with the co-operation of the Tish Murtha Archive, which her daughter, Ella, has managed since Tish’s death in 2013. It is showing, together with Alex Pregar: Silver Lake Drive, at The Photographers’ Gallery, London W1F7LW until October 14th, 2018. 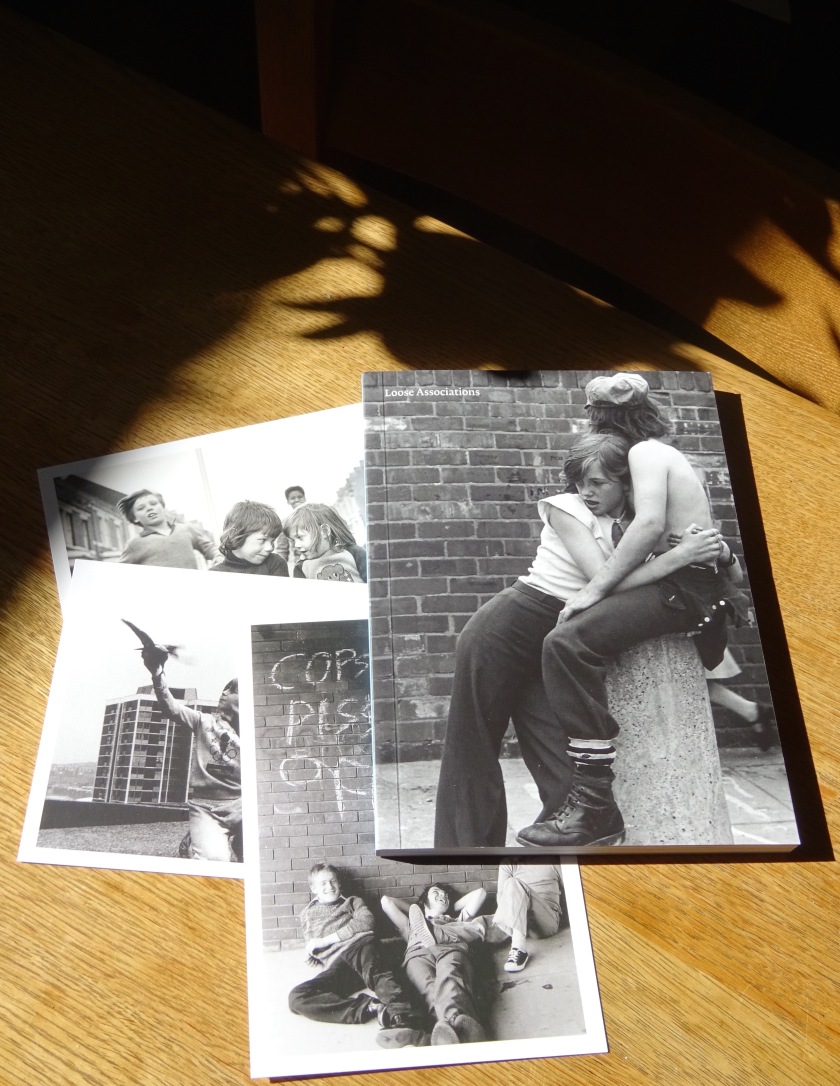